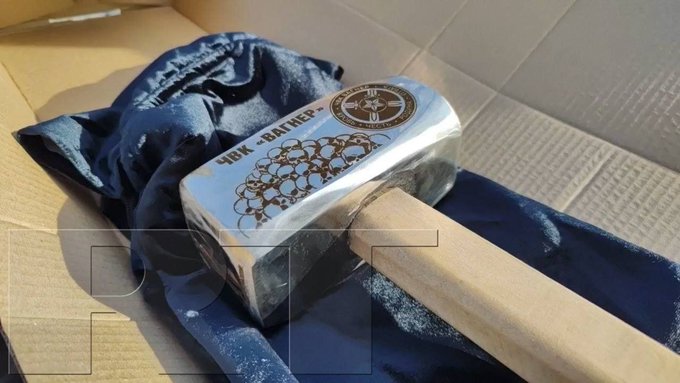 Prigozhin brought a sledgehammer to a Wagner base in Krasnodar region, Russia.
"I brought you a new development. You need to think through training so all the personnel is able to use it".
New Year's gift from a sadist?..
https://twitter.com/Gerashchenko_en/sta ... 6083400705
Ainus, mida me ajaloost õpime, on see, et keegi ei õpi ajaloost midagi.
Live for nothing or die for something.
Kui esimene kuul kõrvust mõõda lendab, tuleb vastu lasta.
Üles

Died "war correspondent" RIA FAN Kirill Romanovsky. This was announced by the owner of the publication, "Putin's chef" Yevgeny Prigozhin. Previously, Romanovsky claimed that he was diagnosed with brain cancer and that he underwent surgery.

Romanovsky is known for bringing Russian journalists Orkhan Dzhemal, Alexander Rastorguev and Kirill Radchenko to the Central African Republic with a man who lured them into a trap where they were shot. This happened on July 30, 2018 near the city of Sibut, not far from the capital of the Central African Republic - Bangui. Journalists turned to Romanovsky on a tip from pro-Kremlin commentator Abbas Juma. Romanovsky gave journalists the contacts of a local guide (fixer), known as "Martin". This “Martin”, in correspondence with journalists, insisted that he was in the city of Bambari, where communication was poor, and therefore he could not call them, but only correspond via WhatsApp (no one heard his voice). It was "Martin" who organized the car, the driver of which, as it turned out, was in contact with the gendarmerie. And it was on the way to Bambari to meet with "Martin" that the journalists were killed. Both Central African numbers - Martin and Bienvenue Nduvokama - turned out to be registered on false documents, the Dossier Center found out. At the same time, in reality, the connection in Bambari is working properly, and “Martin” himself, judging by the billing, has been in Bangui (the capital of the Central African Republic) all this time and has not left it. Investigators from the Dossier Center came to the conclusion that there was no Martin fixer at all, and this whole story was a pre-planned provocation.

In a conversation with The Insider, Romanovsky insisted that he had nothing to do with the murder of journalists, and that the fixer named "Martin" was indeed a real person and his acquaintance, but he could not explain some inconsistencies. So, for example, why did he enter the number of “Martin” into the database of his telephone contacts only two days after he handed it over to the employees of the “Investigation Management Center”.

In addition, The Insider studied his publicly available search queries for July 2018. Some of them point to a high probability of his involvement in the murder of Dzhemal, Rastorguev and Radchenko. For example, Romanovsky googles “russes a bangui” on July 31 at 12:00, five hours before the first reports of the murder. On the same day, he googles “article 105” (murder), although in a conversation with The Insider he explained this by saying that he was interested in the news about the Khachaturian sisters who killed their father (this was indeed the main topic of the news on July 30 and 31). Judging by the history of the browser, towards the evening of the same day, he rereads his correspondence with Kirill Radchenko, immediately after which he suddenly becomes interested in the question of how to clear the phone's memory. Recall why he suddenly became interested in the issue of deleting information from the phone at that moment Romanovsky could not.
https://theins-ru.translate.goog/news/2 ... x_tr_hl=et

After they arrived in the capital, Bangui, they tried unsuccessfully to enter a camp at Berengo, in the southwest, where soldiers were trained by Russian instructors rumoured to be from Wagner, a mercenary outfit said to have connections to the Russian government.

They then moved north where, on July 30, their vehicle was ambushed 25km from Sibut, a town north of Bangui. All three men were killed. Their driver emerged unscathed.
https://www.hrw.org/news/2020/08/10/mur ... o-unsolved
Ainus, mida me ajaloost õpime, on see, et keegi ei õpi ajaloost midagi.
Live for nothing or die for something.
Kui esimene kuul kõrvust mõõda lendab, tuleb vastu lasta.
Üles