Venemaaga seotud küberrühmitus Killnet ründab Itaalia riigi süsteeme
Italian MoD and Senate websites are currently under cyber attacks, the criminal act has been claimed by the pro-russian phalanx Killnet hacker group. The ongoing attack would not have compromised the infrastructure at the moment, but it makes access impossible.
in addition to the Senate and MoD website, there are the Italian National Institute of Health, the Compass Bank, the ACI (Automobil Club) and the company services Infomedix. All major italian newspapers and agencies are reporting that.
https://twitter.com/CiroNappi6/status/1 ... 1645257734
Ainus, mida me ajaloost õpime, on see, et keegi ei õpi ajaloost midagi.
Live for nothing or die for something.
Kui esimene kuul kõrvust mõõda lendab, tuleb vastu lasta.
Üles

Unlike Lithuania, which explicitly blamed Killnet for the hacks, Norway has been more ambiguous about which Russian entity was responsible. APT28 has also targeted the Norwegian parliament in 2020.
APT28 aka Fancy Bear is the Russian Military Intelligence, the GRU. 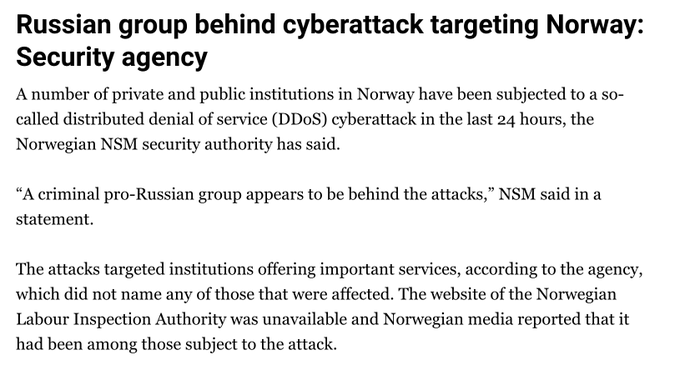 "In recent months, [the hacking group] has compromised the networks of US-based organizations that have data of interest to the Russian government," said Charles Carmakal, senior vice president and chief technology officer at US cybersecurity firm Mandiant, which has responded to the hacks. Carmakal declined to elaborate on the types or number of US organizations that had been breached.

In separate activity revealed Tuesday, US cybersecurity firm Palo Alto Networks said that the Russian hacking group had been using popular services like Dropbox and Google Drive to try to deliver malicious software to the embassies of an unnamed European government in Portugal and Brazil in May and June.
https://edition.cnn.com/2022/07/19/poli ... s-hackers/
Ainus, mida me ajaloost õpime, on see, et keegi ei õpi ajaloost midagi.
Live for nothing or die for something.
Kui esimene kuul kõrvust mõõda lendab, tuleb vastu lasta.
Üles

A reminder that another war is going on, one that isn’t as visible but definitely as devastating as most visible ones.

Security services investigate as hackers feared to be linked to hostile state shut down crucial system, with widespread disruption predicted

Security services are investigating a major cyber attack on the NHS 111 system that has left patients struggling to get urgent appointments and ambulance call-outs.

NHS 111 staff across the country have been forced to use pens and paper after a crucial system was shut down by hackers feared to be linked to a hostile state.

The public have been told to expect delays when calling the hotline, as NHS sources warned the disruption could drive patients to overstretched accident and emergency departments over the weekend. Officials believe the outage will last until Tuesday at the earliest.

More than 1,000 care homes, which use the firm’s Caresys software, have also been affected - along with mental health services across the NHS, which use its record management system.

An NHS source said: "At the moment, call-handling and response times are holding up but there is a concern that that situation may change over the weekend, and that we could see a deterioration.
https://twitter.com/recon_officer/statu ... 6498705413
Ainus, mida me ajaloost õpime, on see, et keegi ei õpi ajaloost midagi.
Live for nothing or die for something.
Kui esimene kuul kõrvust mõõda lendab, tuleb vastu lasta.
Üles
Vasta
341 postitust